while you scream inside because you always put yourself dead last?

Let the Untold ‘Wake Up Warrior’ Story of Bryce Neier give you permission to make a stand for everything you really want in your life and stop settling for less than you deserve. 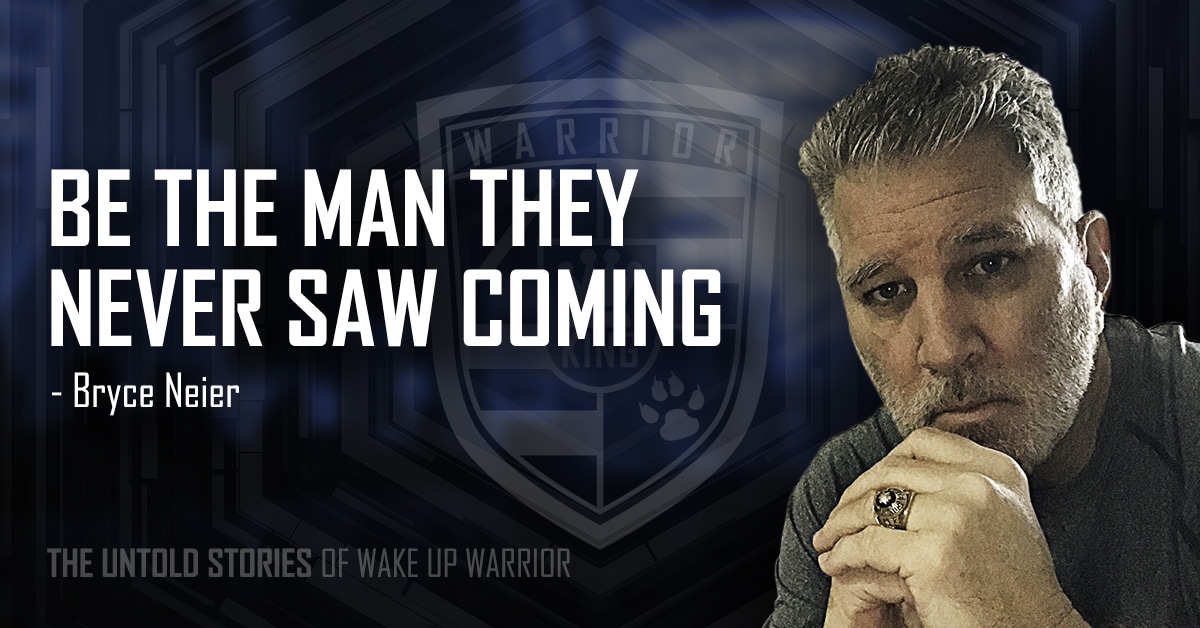 Be The Man They Never Saw Coming

Imagine this…You wake up every single morning with a certainty in yourself that cannot be broken and a focus that is crystal clear.

You know only one thing.

YOU are a man back on a fucking mission.

And now you have the skill sets + the weapons of extreme ownership that allow you to drive forward relentlessly in the pursuit of your expansion.

There is absolutely nothing…and NO ONE…that can prevent you from unleashing every possibility in your life; and when you look in the mirror, you know the truth is staring back at you.

Because you can see the evidence of who you are choosing to be.

You’ve mastered the art of torching your excuses in a bonfire of letting stupid shit go.

So you can finally let in the light that leads you to who you’ve always been called to be.

This is how Bryce Neier wakes up every morning, ready to make a stand.

Ready to take it all on with zero fucking apologies.

“I am equipped to collide with anyone at any time.”
-Bryce Neier

He is fully committed to living out his Warrior’s Way.

But 7 short months ago, he saw something far different in the mirror.

A man who put himself dead last.

He had one choice.

Pull the fucking anchor up and SAIL ON.

He did not want to get back on that fucking plane.

Because he had seen too much. The last few days of being immersed in the brotherhood of Wake Up Warrior at a live event had ripped him wide open.

So he sat there in his jeep for hours, a thousand-mile empty stare across the Pacific Ocean.

As his mind wandered to thoughts of his life back home and the hardcore reality of what was waiting for him twisted his intestines in knots.

“I’m living in a cesspool of intolerance. A clusterfuck from A to Z.”
– Bryce Neier

And that’s when he stood face to face with an ice-cold fact that chilled him to the damn bone:

He didn’t want to talk to a soul back home.

Yet everything he’d discovered pushed him to collide with his wife, son, employees…everyone.

Telling the truth was the only way he was going to set himself free.

The only thing that could break the chains was for him to make a fucking decision.

But how could he when his mind kept repeating a single lie until it felt like it was going to tear open his skull?

The lie that he had to keep everyone happy…

A lie that had turned his home into Hell.

But how? Where did he get off track?

When did his life get all fucked up?

It came down to something that we’ve all been programmed to do.

A way of being that tricks us into believing we are being a righteous man.

When in fact, it leads you down a road to self-annihilation.

Bryce only knew one way of living.

It came down to this…

“I have to take care of everyone else, not me.”

And in his world, this became a burden that almost broke him in two.

Because at times it seemed as if he was damned to suffer like the trials of Job himself!

One crisis after another tore his life apart.

And yet Bryce just kept sacrificing himself for the protection of everyone and everything around him.

In a fit of rage, he finally accepted the truth.

He let the words erupt from his imprisoned soul.

“I’m doing for everybody else but no one gives a fuck about me!”

Do I not matter in this shit?”

He was going fucking crazy…

And Wake Up Warrior was the sanity that could liberate him from the pain.

Giving Away Sole Custody Of All The Bullshit​

“WTF are you doing with your life?”

How many times have you asked yourself that question?

Bryce had it spinning like a broken record in his brain as he leaned all the way into his experiences inside of Wake Up Warrior.

And with each new breakthrough, he was finally starting to see.

He was in a shitstorm.

Warrior was stirring the dust up.

So Bryce had to be willing to stand in the eye of that storm.

Because he had never given himself permission to release his rage.

All those years of putting everyone else first stuffed things away into the deepest, darkest pockets of his mind, heart, and soul.

And every day he didn’t speak from his truth…?

The more his silence left him deaf to his own power as a Warrior King.

So inside of the Warrior community, he let his rage finally be known.

He finally knew what it was to be heard.

Because his brothers in arms roared at his side.

They knew his pain!

Imagine yourself finally making a stand for what you really fucking want and having thousands of people scream their support?

Men who know the exact battles you’re facing head on…

Men who are willing to wage war and bleed with you!

But releasing the rage was only the beginning of Bryce’s transformation.

The more he learned how to execute with the tools & principles of the Warrior’s Way…?

The more he discovered that his choices were simple.

He could put up or shut up.

Because what he found inside down his own personal journey inside of Warrior is that the road to your liberation is pretty damn cut and dry.

And talking a great game doesn’t mean you’re winning one.

It’s about a relentless follow-through on getting your shit done.

It’s about your RESULTS – not your rants.

And one day Coach Sam gave Bryce a brutal right cross of clarity.

“You’re talking all this shit.

But shut the fuck up and do what you said you were gonna do.”

And so he did.

“I divorced the toxic people in my life.

You can have sole custody of all the bullshit…take it all.”
-Bryce

He began a daily unbreakable ritual of his Warrior’s Way.

He knew it would take time.

It would require patience.

Because there is no 90-day FIX in Warrior, or anywhere else.

And he was headed into deep fucking waters.

But now he knew how to navigate them as a Warrior King ready to conquer new lands of expansion.

These days Bryce is making a stand in every decision.

And he lives his new life by a very simple mantra…

“Lead, Follow Or Get The Fuck Out Of My Way!”

You Can’t Complete With Ghosts

Bryce has a past.

And so do you.

But the reality you must accept today is this…

It’s the only way up and out of the pit you might find yourself struggling in today.

You must move forward and do the fucking work for yourself.

Because as Bryce discovered on his journey, there are no exchanges for our past.

There are no refunds.

You can’t cash in years of woulda, coulda, and shoulda like some long overdue I.O.U.

As Bryce continued with his relentless commitment to his Warrior’s Way, one night he found himself looking back at stacks of old photos.

He put on some 80’s music, grabbed a few beers, and kicked back.

Scanning through all those memories of who he used to be.

Then he made a decision.

He boxed up all his old pics and stacked away the albums.

Because no matter how long you stare at the past…

You can’t bring it back.

“I can’t compete with these old ghosts, I can’t resurrect anything.”
-Bryce

But through releasing his past, he has broken his chains.

Nothing can hold him down.

Because now he strives for his own redemption daily.

And he earns it through the work of finally putting himself first.

He was able to put his health as a priority and because of his Impossible game targets, may have avoided a terminal illness.

His relationship with his son is on fire and in a constant state of renewal and deeper connection.

He has doubled down on his faith in Christ and continues to lean into his pursuit of forgiveness and repentance.

He is finally getting real about leaving his old profession and pursuing with ruthless commitment other business ventures that fulfill him.

PLUS, he has been decreasing the number of clients but increasing his “cash to keep” to radically shift his financial leverage.

All because he stopped putting himself last.

He chose to believe in a version of himself he thought he’d lost forever.

But inside of Warrior, Bryce went from completely numb to burning alive with a soul-driven purpose that liberated him from the darkness.

He remembered who the fuck he could be.

“I’m the man you never saw fucking coming, and neither did I.”
– Bryce Neier

How long will you wait to find yourself again?

When will it be your time to stop competing with your ghosts?

What could be possible if YOUR mission came first?

You can find out starting today by enrolling in the Wake Up Warrior Challenge NOW!

From Bryce's Wake Up Warrior Story...?