Discover how a man who was burning his entire life down...

...Turned his fire of self-destruction into a blaze of liberation.

Conan Hansen's 'Untold Story of Wake Up Warrior' will show you that the road to your power is paved with your courage to face the truth and rise beyond the lies. 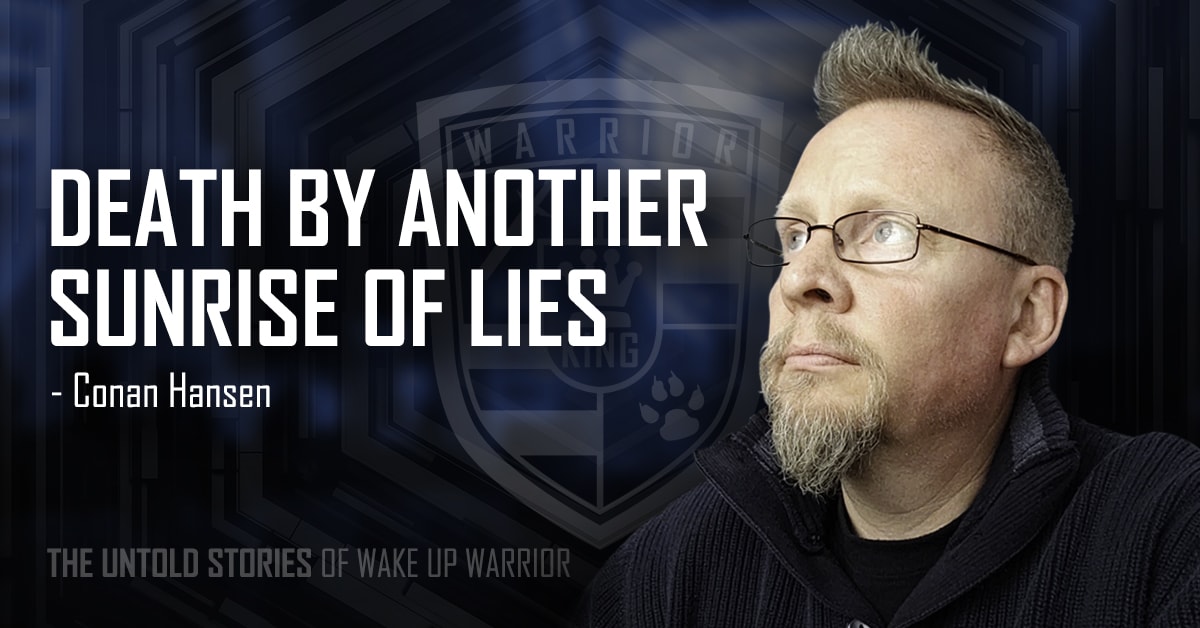 Death By Another Sunrise Of Lies

As he peeled himself off the bed, that familiar stench of bourbon invaded his senses.

The smell of a man rotting away inside.

He was killing himself…And he fucking knew it.

Because in his mind at the time, it was the most logical thing he could do.

What else can you do when you find yourself pitched headfirst into an endless hell of unshakeable hopelessness?

Conan Hansen found himself in a place where he thought the only solution that would silence his pain was drinking himself to death.

He came across a message from a man by the name of Garrett J. White.

A man who spoke words that sliced like a razor inside Conan’s heart.

Cutting him open to reveal what he’d never been willing to face in the past.

And when he heard Garrett’s words, it unlocked a sobering truth.

Scorched Earth And Hangovers Of Hiding

The only thought that consumed him was that he wanted to destroy fucking everything…To burn the whole world down to ash.

And he became very good at it. It seemed that everything he touched blistered into scorched earth.

Whether it was at work, with his kids or even his new wife…All he could see was the sweet release of self-destruction.

“This is just my wheel. I’m just a hamster running as fast as I can and not going anywhere, but knowing that at some point I was going to “end things” with the decisions I was making.

Which is so fucking fatalistic man it makes me sick to even verabalize it that I was in that state.”
– Conan

And 100 proof Knob Creek bourbon provided the perfect fuel to stoke his fire of self-loathing.

Every sip turned him blind to anything good in his life.

Because not only did getting hammered wreak havoc with his work, family and health…It was a way for him to hide.

A way to hide from what was really killing him…His lies.

But no matter how much he pounded that bourbon…

The lies always resurfaced in the morning.

The things he would not dare speak out loud.

Like the cold, hard fact that he’d spent decades creating “his shell.”

A shell that became protection AND a prison.

Through listening to Garrett, the Wake Up Warrior Message, and investing in the WarriorBook…

He came to realize that he’d created false personas to protect that small inner child that never got to really find his own Voice.

Because his definition was caged up in other people’s stories.

Parents, happy horseshit religiosity and a society of sedation.

So Conan developed his shell of armor to protect himself from the reactions of the people he “disappointed” through being himself.

Through this so-called protection, he locked his true identity away.

In those dark corners, his rage boiled.

It wanted to roam free.

But everything he’d been taught through his life told him that the honesty of his rage and accepting that everything wasn’t ok all the time was an ugly truth that could never be revealed.

And so the lies infected him for years.

I had to break all that shit down and I wanted the tools to do it.

But through the daily work of Warrior, every single damn day, I’ve got little glimpses of who I can become…and I kinda like him.”

The Self-Autopsy Of The Stack

Through the work is where you find your revelation…your power.

And yet how many times do we ignore the simplicity that leads to our liberation?

And his battle axe for expansion was The Stack.

The weapon that allowed him to perform a daily self-autopsy on his heart, mind and soul.

But before he began sharpening that blade of self-analysis…

He received a gift from a brother in the Wake Up Warrior Network.

Alan Belkin shared a post. Conan commented on it.

Then Alan posed the challenging question…

Most men would’ve cowered at that moment.

Plus Conan will tell you flat out that he’d become a master of that through his “hangovers of hiding.”

Conan went LIVE inside the group on video and told all about the affair that shattered his first marriage.

He picked up his battle axe of brutal honesty and released a hell of healing!

In his head, he spoke these words of extreme ownership…

“Dude fine…If we’re going to be this fucking real, I’m going to go down to one of the most painful fucking experiences as a result of my shitty choices. And go into that space WILLINGLY. Where people can go ahead and beat me up and do whatever because I don’t care. Because I’m so fucking tired of living small.”

In that brutal share, Conan found the hardcore truth of his acceptance.

No more hiding. Only a relentless battle for his truth. And this is when Conan found that the ruthless self-autopsy of the Stack is the access point to increasing your capacity to become a true creator.

The Stacking process allowed him to go head to head with the demons that were chained in the darkest corners of his identity.

To stand face to face with his ugliest fears, his ego splintering weakness and a soul sucking lack of self-gratitude.

So he accepted a challenge…30 days of gratitude FOR HIMSELF!

And through that simple daily challenge of stacking himself with gratitude, he kicked open the doors to a healing he didn’t expect.

A healing that would drive out his long held scarcity beliefs and crack open a new way for him to get paid!

He realized all the stories of him not being powerful, worthy or deserving of being a creator as a businessman were just more fucking lies.

So after his 30 days of stacking gratitude, he did something that never would’ve entered his mind a year ago.

Conan took $250 and started a fucking business of his own!

Having the fucking balls to just go start a business is something he wouldn’t have done before because of all the self-doubt, self judgment and shit that had been floating around in his life for so long.

“The chaos that had been in my life before was driven by my stories and lies.

Now I’ve shifted into a place of certainty and clarity because I actually understand who the fuck I am.

I got to a place of seeing me…Understanding me. Loving me.

This is literally fucking changed everything in my life and I wish that I had known this fucking years ago.”

Wake Up Warrior and the Warrior’s Way has shown Conan that discipline and consistent commitment daily is where he finds what he wants, and creates what he wants.

And he taps into his growing capacity for power by simply trusting and surrendering to a process that’s been 10+ years in the making.

Conan is no different than you.

He doesn’t have access to any tools that you wouldn’t inside this movement.

Every day…He walks the simple path.

These are the tools and they are fucking proven.

They have been forged in the white hot blaze of expansion with thousands of previous Warrior brothers and sisters.

The Warrior’s Way is a steel that has been folded over and over like the blade of the samurai.

It is a weapon READY FOR YOUR WAR.

The war to discover and accept your voice…your power…your calling.

But I can’t pick that blade up for you…Neither can Conan.

The choice will always be in your hands.

“Using the tools especially stacking, has just become part of my life now because I recognize the power of the conversations that I have with myself in those places and I go there willingly because I want the fucking power.”

Are you tired of playing weak-ass games that are not yielding the results that you want?

Isn’t it time you stop playing the role of a fucking victim?

What if you followed the same path that Conan chose to free himself from a lifetime of lies?

Your journey of expansion can begin…

NOW, by stepping into the Wake Up Warrior Challenge TODAY!

From Conan's Wake Up Warrior Story...?